DEATH OF THE BODY 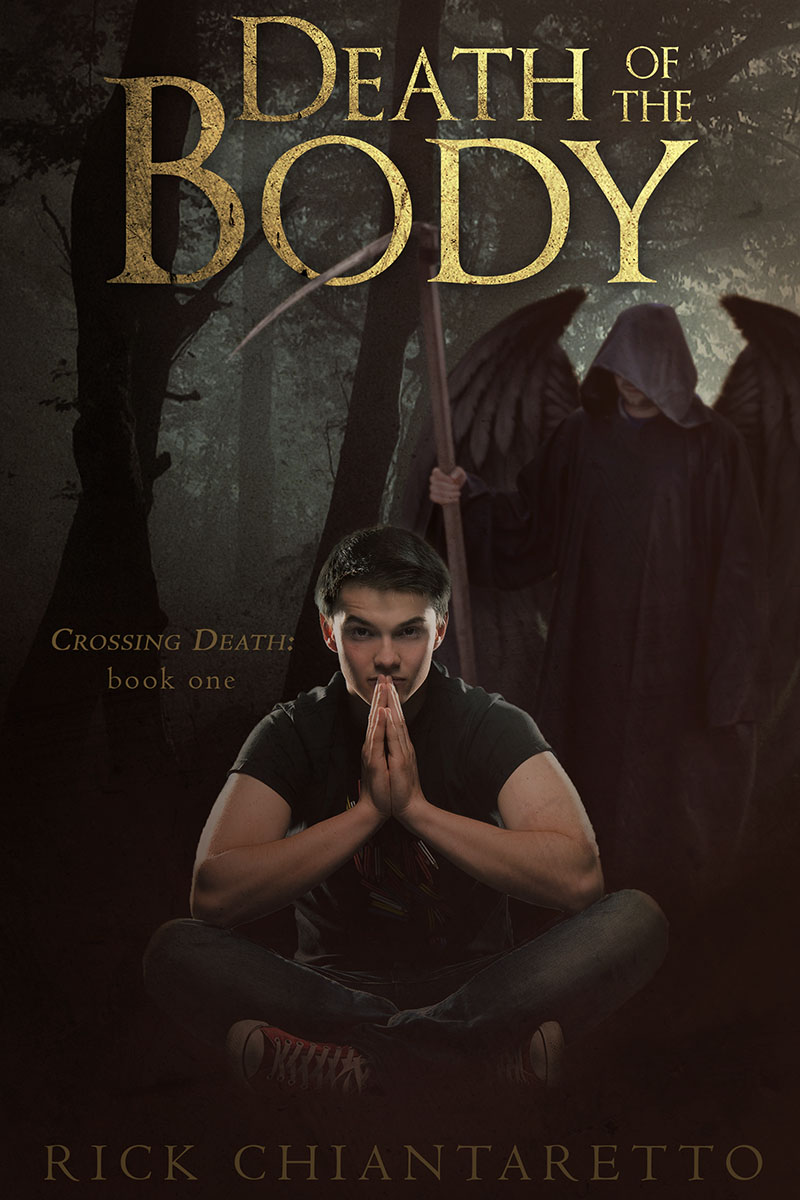 I grew up in a world of magic. By the time I was ten I understood nature, talked to the trees, and listened to the wind. When the kingdom of men conquered my town, I was murdered by one of my own—the betrayer of my kind.

But I didn’t stay dead.

I woke to find myself in a strange new world called Los Angeles. The only keys to the life I remembered were my father’s ring, my unique abilities, and the onslaught of demons that seemed hell-bent on finding me. Now I must learn who I really am, protect my friends, get the girl, and find my way back to my beloved hometown of Orenda

Get the eBook, now on Kindle Unlimited!
Buy the Print or Audible editions

I watched in disbelief as blood seeped through my fingers and dripped, thick as syrup, to the ground. I heard each drop thud against the ground beneath me. The echo in my ears beat louder than any drum. For the first time in my ten years of life, I cursed the connection I had with the planet. I cursed it for its betrayal. I cursed it because, with every drop of blood that spilled, the planet felt my pain and mimicked my screams with its own bleating sound that bounced around inside my already spinning head.

My legs were weak and my knees buckled but I didn’t dare let my hands loosen from around the wound in my stomach. I caught the weight of my fall with my face. I rolled onto my side in order to breathe. Pain surged as the ragged edges of my wound rubbed together. I felt every last severed nerve. They were all on fire.

Blood poured quickly. Worse than seeing it, I could feel it, hot and sticky in a pool beneath me. My stomach retched but it would hurt to throw up so I tried to force down the feeling. Bile came up anyway. I turned my head and choked it out. The rusty taste left in my mouth was so sour it made my eyes water. I cried uncontrollably, feeling ashamed of myself.

I wished for the comfort of my mother and father. I longed for the company of my two best friends. It was ironic that I’d just had a conversation about death with them a day ago.

As I lay sobbing on the ground, the thought that I was going to die became more and more real. Already my blood was soaking back into the earth that I loved so much. I thought of the lessons that taught me not to fear death. I had been taught that death was a return to the larger conscious mind that is nature. This awareness made my people who they were and gave us our unique gifts.

I was afraid anyway. The thought of dying was much more terrifying now than when it was taught to me by the Elders.

The Elders. The Elders who were either dead or enslaved. The Elder who betrayed us all and who did this to me.

Rage: pure, blazing, and blinding in its fury. I was too enraged to even notice that I could feel anything besides pain. Rage boiled inside me as blood boiled from my stomach and I realized it was based in two other emotions: hate and disbelief.

Then something cold and wet hit me between the eyes. I rolled onto my back and stared into the dark and threatening clouds. Another something hit the back of my hand, and I lifted it (was my arm always this heavy?). A drop of rain mingled with my blood.

I had never experienced rain before. It never rained here—at least not in my lifetime. Rain was for when the world was angry, when its powers had been abused and the balance of life had been disrupted.

But wasn’t I angry? And wasn’t I connected to the planet? Didn’t I understand its moods and feelings? Why wouldn’t it then understand me? In my delirium this seemed to make sense, and the large flash of lightning that then split the sky seemed to confirm my thoughts. The flash was blinding, and I didn’t have enough energy to be startled by the fact that my vision remained nothing but the same bright white light.

I shivered as cold crept into me; it didn’t help that I was lying in a chilling pool of blood. The rain picked up. I was nearly soaked through, but was too weak and numb to move. At least the pain was starting to slip away. I could only imagine how blue my fingertips must have looked. They felt like ice.

After the pain was gone, the fear began to fade. All the tension in my body went with it. Cold as I was, I started to feel strangely comfortable. I could feel the earth beneath me, supporting me, soft and gentle. My mom used to hold me like this.

As the rage faded further, I thought I heard distant laughter. How could anyone be happy now? How could they laugh as I lay here, a mangled mess? It took me a minute to remember that just because the earth could feel my pain didn’t mean everyone else could too—especially not the outsiders.

Their voices were getting louder and nearer. When they suddenly stopped, I heard a gasp. Mustering the last of my strength, I reached toward the voices.

“Please,” I tried to say, but it came out as barely more than a groan.

“Get a doctor!” a woman’s voice commanded. I felt slight vibrations through the earth as somebody ran away. The woman who spoke came over and kneeled next to me. I wasn’t too far gone to feel surprise. I imagined I was a frightening sight. I expected her to keep her distance, so my eyes widened when she took my hand in hers. She was warm, but trembling.

“What did this to you, child?” Her voice shook but was full of compassion and concern.

“Magic.” I couldn’t tell if I actually said the word or just thought it.

As I repeated the word over and over in my mind, the rage dissipated and the light began to dim. A part of me was upset that I’d let the rage go but I was too exhausted to call it back. I welcomed the darkness now. The woman at my side was saying something but her words made no sense to me. Far easier to hear was the heartbeat of the earth. I wanted to soothe the earth’s tremors caused by the pain and fear it felt for me, but I couldn’t. As my breathing slowed, memories of the past day flashed into my mind. They were of the events that led up to my death, when all this started. It seemed like a lifetime ago. Who would have known it would only be one long day that would lead me here, lying on the ground, spilling blood?