DEATH OF THE SPIRIT 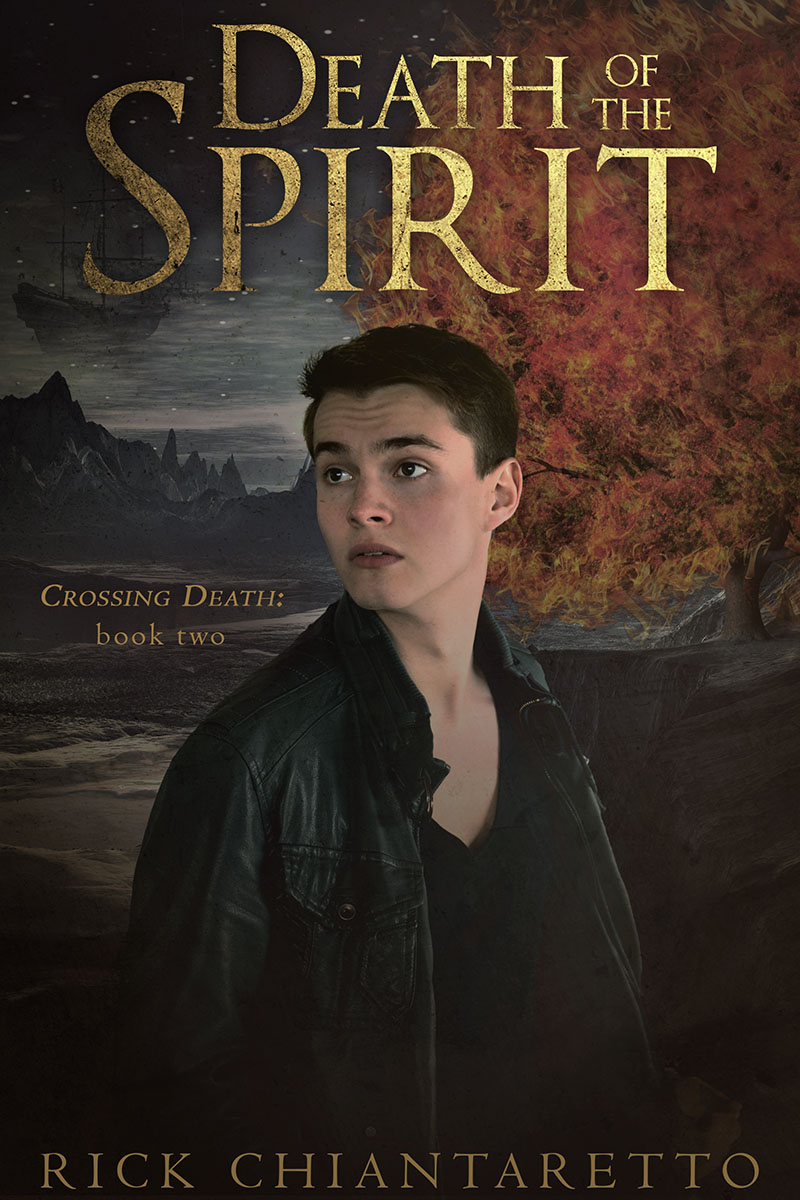 I have no idea who I am anymore.

In Los Angeles, I would have given anything to go home to Orenda, my world where magic was alive and nature spoke to me. Now that I’m back I feel out of place, burdened with responsibility. The human part of me misses the simplicity of Earth, the mage part begs for connection with magic, and the demon part? I don’t want to admit that exists.

As the darkness inside me grows, I’ll learn to sacrifice for the greater good, as my people have always done. In order to save my family (both mage and human alike), I must face my nightmare, embrace the demon, and descend into the shadowy world of my enemy—the Hell of the Damned.

Once there, I will have nothing left to fear but myself: Edmund Gavel, human, mage, demon… maybe monster.

I watched in disbelief as blood seeped through my fingers and dripped, thick as syrup, to the ground. I heard each drop thud against the ground beneath me. The echo in my ears beat louder than any drum.

This time, it was different.

This time, it was someone else’s blood.

The descent into insanity was like plunging into a frigid lake. The hair on my arms stood on end as blood turned to ice in my veins. Waves of goose bumps danced over my skin, scurrying up and down my arms like bugs―thousands of tiny feet skipping along my flesh, crawling through the hair of my arms, legs, and head.

I scratched at the thought, which did nothing but smear the now-tacky blood all over. As soon as I felt its hot fire on my skin, the itching changed to frantic and futile attempts to wipe it off. I whimpered. My vision clouded over in foggy red. I knew no matter how much I washed, I would never feel clean again.

Then the ringing started. It wasn’t just the annoying soft under-ring you sometimes hear when you’re smothered in silence while your mind tries to compensate by making up an imaginary noise. This was an alarm blaring impossibly loud, waking me out of a nightmare. I clasped my ears and screamed at the top of my lungs, but I couldn’t hear my own voice over the ringing. I was barely conscious enough to realize that the buzz buzz buzz in my ears matched the beating of my own heart.

My muscles convulsed, the bugs crawled, and the ringing consumed all five of my senses. I could feel nothing else, hear nothing else, and all I could see, taste, and smell was blood.

A jolt of adrenaline hit my system as my brain registered that I had just committed murder, but instead of that adrenaline triggering a flight response, it made me aggressive. Rage boiled from a dark pit in my stomach like lava boiled out of a volcano… hot… thick… destructive. I had to put that rage into something, anything! The black veins in my forearms were about to pop under the pressure. I grabbed the knife and struck the woman over and over and over again. I heard the blade sink into her body, slicing through flesh, muscle, and bone. The slurping sound it made as it retracted was like therapy for my diseased mind.

I laughed as I stabbed. I grunted as I cut. I felt charged and powerful as I slashed the tip of the knife deeper and deeper, harder and harder into the sticky flesh.

Venting my rage with the blade was arousing… until the world started spinning.

My body felt strong, but my knees buckled as the cavern spun around me with dizzying velocity. I crashed, tears flooding my eyes. I hyperventilated until my vision cleared and I woke to the horror of the scene around me.

My spirit was weak.

A bleeding spirit is much like a bleeding body. I’d heard of people on Earth who were spiritually dead―murderers who had no remorse for what they’d done, who walked around with cold hearts and hollow eyes. I could never understand just how sick they were.

I dropped the dagger, letting myself fall the rest of the way to the ground, not bothering to catch myself. The rocky earth was hard, but I couldn’t feel it anyway; all I felt was the crawling of my skin and the stickiness of someone else’s blood.

My vision blurred again, but the vertigo remained. I convulsed and shivered. I saw flashes of red lightning as my mind lost perception of reality, red lighting that illuminated the face of my victim. Her eyes were still staring at me.

Those eyes had pleaded before. There had been a brightness and quickness behind them that echoed the sharpness of her soul. Now they were vacant and empty, her true self gone, her carcass so mutilated she was hardly recognizable.

I knew where she would go. I knew she would be born again on Earth to live a normal human life. I guessed she would probably be a talented witch there.

Is it truly murder if you know that death is only a door to another place?

Why did death on the Level of the Body, Earth, seem so definitive and final?

The only thing that truly ended was her memory. She would never remember. She would never know who she had been or the full potential of her power. I stole that from her, and the thought made me laugh maniacally. I couldn’t control my laughter. The power! How easy it was to simply take. It was just one itty-bitty life. And what was memory but a fragile, useless, pointless, selfish, defective, pile of shit?

Joshua had already stolen that part of her anyway. He was the one who’d enslaved her, who’d made her forget her family, her life, and her strength. All I did was ensure that she’d be born again into a life of freedom and free will, a life where she could choose to be whomever she wanted to be. A life where she was free from the burden of knowing she was my mother.