There are a two Halloween memories that really stick out in my mind as some of the happiest moments of my life. The first was when a group of my friends and I went down to The Haunted Forest, an outdoor haunted house attraction in American Fork, Utah. A friend of mine, Hilary, brought a date and was so terrified that she ran as fast as she could through the whole event. I think I only saw her for the first 20 or 30 seconds before she disappeared, pulling her poor dates’ arm off in the process.

After getting out of the attraction myself, we found her chatting with some of the other members of the group about how she missed some of the most entertaining parts of the haunted house. This made me very sad, because I knew that as scared as she was, she didn’t REALLY get the full experience.

Near the end of every haunted attraction in Utah, you can guarantee a guy with a chainsaw will be there to chase you out. Me and my friend approached this chainsaw man while he was waiting for the next victims to arrive, and explained that our poor friend Hilary really didn’t have much of a chance to experience being scared (she totally missed the awesome flame thrower and the creepy children!).

Surprisingly, the actor broke character. “I’m not allowed to go past those rocks,” he said, pointing to the boundary, about twenty feet away from where Hilary was standing.

“If we get her over there, can you help us out?” we asked.

The man agreed, so we rejoined the group waiting for some of the stragglers to get out, and engaged in conversation, ever so slightly inching the circle closer and closer toward the rocks.

It must have taken fifteen minutes or longer to get Hilary to where she was finally within the boundary. I thought after all that time the actor would have forgotten our request but as soon as Hilary stepped one foot inside the legal chain-saw-massacring zone, the actor charged up behind her, chainsaw in hand. 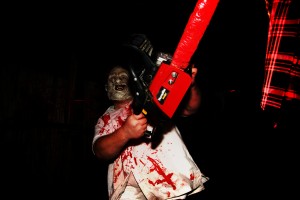 Now imagine not only feeling totally safe because you’ve already made it out alive, but hearing the chainsaw after some stranger screams your name!

“Hilary!” the actor growled, starting the chainsaw just behind her back.

I’ve never seen someone jump so high in my life. She soared over her date, and ran so fast that she plowed me over and scurried up and over my friend faster than a squirrel could scale a tree.

The actor high-fived me as everyone died of laughter.

To this day I remember watching how expertly this actor snuck up behind Hilary, with a quick but calculated gait. It had to be one of the most incredibly timed, perfectly executed shuffle, name calling, and chainsaw-starting events in the history of the world.

My apologizes to poor Hilary, but I still look back on that night with fond memories. And before Hilary blames me entirely, yes, her date was in on it.

My other favorite Halloween memory was a spur-of-the-moment Halloween night decision. I was in my early teens and had no plans (and the cutoff age for trick-or-treating in my house was 12). I decided to dress in my dad’s giant camouflage clothes, and stuff myself with newspaper. A ski mask, some sunglasses, and some black eyeliner to fill in where skin was still visible completed my costume. I tied the ends of the sleeves and legs off, and even put some newspaper hanging out of my eye socket. All of the lumps and bumps made it very hard to tell that there was an actual person inside the baggy clothes. 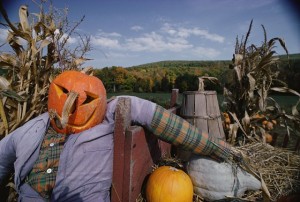 I’ve always been a small, skinny guy, so by the time I was done I looked more like those leaf-garbage-bag scarecrow-type things you sometimes see on people’s porches in the fall.

I then took a bowl from the kitchen and filled it with candy, and taped on a sign that said “Please just take one.”

I’m sure you can see where this is going, and it wasn’t an original or novel idea, but the execution was thrilling. I sat on the porch, slumped in a chair. I had people come up and kick me, pinch me, and otherwise try to prove I was alive. Afterward, some of them decided to be safe and take just one piece of candy anyway. Those people never saw me move.

I remember two guys in particular, who debated whether or not I was real. They pushed my leg back and forth a few times (which I let swing gently, just like it would if there were just a broom stick in the pant leg). They decided not to risk it.

I’m afraid a poor innocent lady, who I couldn’t even see coming up the sidewalk, got the worst of it. The guy in front of her decided to take more than one piece of candy. I grabbed his hand so quickly that even he was startled and yelled, “The sign says just ONE.”

The woman dropped her bag of candy, grabbed her child, and ran down the street screaming bloody murder. She never did come back.

The next year my little sister played the stuffed guy on the porch while I yelled at people from on the roof. My entire family still looks back on those years with fondness.

What are some of your favorite Halloween memories?! Tell me about them in the comments below.